Well 2012 was certainly the most memorable of my five Three Peaks and for the first time I thought I should record the experience so that I can remind myself over the next few years that it can't be this bad! So yes I've already talked myself in to doing it again.

My summary would be:
START - survival

Felt unusually nervous knowing the conditions were going to be horrendous and that the usually pessimistic BBC weather forecast was going to be accurate for once. As a result of faffing around wondering what to wear (just like my girls at home) I ended up being late for the start and found myself too far back for the fast neutralised ride to the Gill Garth turn. The judicious use of some fast riders coming through helped me make up some ground.

As usual my training on the relatively tame Cotswold escarpment, a sixth of the height of the main climb, is nothing compared to this ascent. I stupidly found myself on the left using the fence line to help get up but that quickly became a stop-start affair with the congestion - amazed that the fence doesn't collapses under our weight. Huge respect to those that helped lug our bikes over the wall in the grim rain and wind. I really must take up some fell running across the border in Wales.

I tried to ride the last stretch to the summit but the increasing strength of the wind was a shock - I'm sure my cheeks were rippling as if I were suffering G forces or in free fall (Whernside was the same). The preceding section was the usual ride/run/crawl affair due to the deep peaty ditches every few metres and riding was a battle on the bars to keep the wind sheer from pushing the front wheel off the fine line that meant probable puncture. On the summit, and like club mate Nick below, I found myself battling and leaning in to the wind trying to stop the wind yank the bike off my shoulder. Not for the first time I was wondered why the hell I was doing this race but that thought soon dissipated when I saw the poor dibber reading marshals at the top meaning the first descent beckoned. 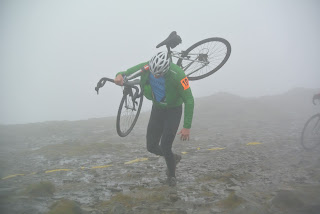 Quite enjoyed the descent as I failed, for once, to find that hidden ditch that usually has me over the bars but that water logged shag pile moss carpet was so speed sapping.
The organisers had their usual fun at the bottom in funnelling us in to the deep mud bog - it reminds me of the incredible Sodbury Slog running race where you can hear the spectators from some distance away laughing as runners fell. This time it was the poor sods who went on the right hand side who came to a wheel sucking stop.
Shouts of "keep to the left" and for a nanosecond I wondered whether they were being cruel and directing me to worse - not the case so thanks girls for that :-) 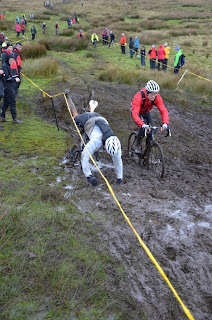 In past years this seemed such a slog along this lumpy road but with such strong winds on our tail this was almost enjoyable and I even grabbed a glance at the raging torrent to my left (River Doe) as I passed the White Caves before realising with dread that I was about find out where all that flood water was coming from.

The climb was just a mind numbing head down slog up the granite steps. All I remember was the stinging, driving rain and for some reason, unlike the pair feet in front of me, I kept stumbling on the rocky steps resulting in a sharp, searing ankle pain (old running injury) when I landed awkwardly. As I neared the narrow rocky section at the top we're led (apprehensively for me) along a narrow path with the cliff edge on the right and the gales unhelpfully coming from the left. This was followed by a wind assisted ride along the top ridge remembering that in my first 3 Peaks (2000) I stopped to take pictures of the spectacular views - it was warm sun shine back then ....... ah, those were happy days :-)...... back to reality.

I love descending, am quite good at it I think, and during training I kept trying to scare my 'cross club mates with some Leckhampton MTB down hill tracks but I have a thing about those bloody slabs and those wide drainage channels. Without any support, spare bike or wheels I become so risk adverse that I end up taking way too long as I run down the soggy grass slopes. As per previous years I promise myself that when there's a dry year I'll try riding it.
The rideable bottom section meant I could pass others before suddenly realised I had bugger all brakes and certainly none at the front! I only bought the bike 8 weeks before and I didn't think to check or fit new disk pads. Another DNF thought, I've lost count now, crossed my mind as another climb and a brakeless descent beckoned.

My pre-race plan was to get in a group to help counter the strong head wind, help with the through and off, rest, etc and manage the usual cramp I get on this section. But where was that group when you needed it - obviously I've been too slow. There were some lone riders on the road around and I was passing them with no sign of cramp - my DNF thoughts dissipated.
I spent the time with cold wet fingers trying to tweak the cable adjusters to get some braking force on the rear disk. Front was clearly metal on metal and the metal tab on the pad (RHS of the above photo) was clashing with the rotor arms at slow speeds.

Kicked in the 33-32 gear to ride up the track - the first time I've been able to ride the whole track to the moor; the bike proving its worth. The day before I had seen the picture of the stone wall high  flood and rode through it with a childish joy - vision of returning down through it with feet out wide.
The slog to the top didn't seem as tough or as long as the first two climbs but I was wondered whether the fell runners ran this section to that right grassy banked turn (marshal with water bottles) before the rocky path close to the summit.


No let up on the wind at the summit - Mountain Rescue apparently recorded 50mph winds - no more to say than that really!

Previous years have involved a painful descent trying to brake on useless rim brakes (my fingers used to cramp up with the pain). This time I graunched down on worn pads but least my hands were pain free :-)

Enjoyed shouting (warning shouts, not abuse!) and passing others at speed before having to dismount and jog through the big flooded section when someone inconsideretaly came to a stop right in front of me. 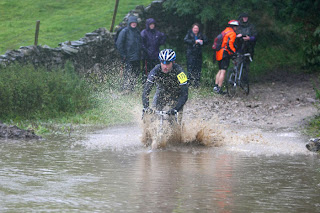 That feeling of relief as I saw the tarmac at Horton is so strong - obviously a roadie at heart. I soon suffering my first signs of cramp as I tried to put some power down to pass a couple of riders.

Finished with such relief and in retrospect I was so glad I didn't succomb to the many thoughts of quitting - sod the lack of a PB - it's just great to say I've completed one of the hardest 3pks.

Thanks to all those that helped and of course John for organising this race once again - hope this race continues next year.